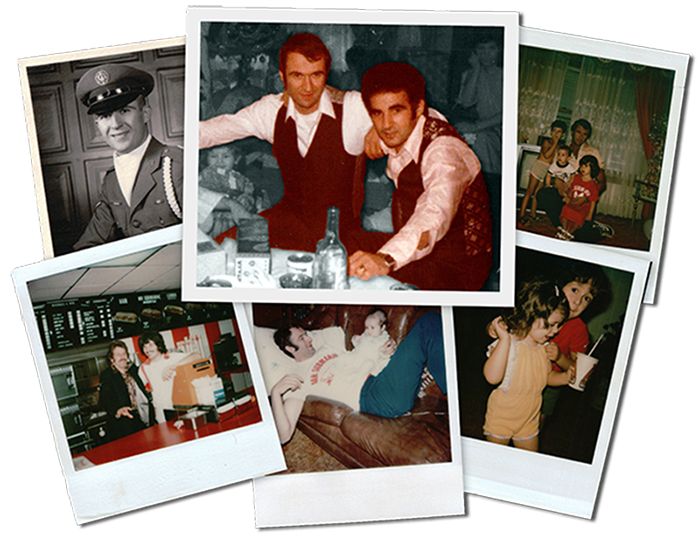 Chicago’s original submarine sandwich franchise, Mr. Submarine, was introduced to Chicagoans in 1975 but long before there were subs, there was a dream. Our story began across the ocean in the bustling Mediterranean port city of Patras, Greece. A young entrepreneur by the name of Nick with a knack for hospitality and a passion for food opened a tiny restaurant café to support his wife Demetra and their growing family.

Nick was a dreamer with the drive to make things happen and although the café provided for the family, he had his sight set on the American Dream. So, with what little savings they had, Nick, Demetra and their four sons, sold everything and set sail for America. In 1960 they settled in Chicago where there was a large immigrant population and an established culture of foodies. Though Nick and Demetra knew little English, they found work and saved enough money to open their first business in America. By then, the boys were old enough to contribute so the restaurant was aptly name “Nick & Sons.”

Nick’s eldest son, Gus, garnered much skill and experience growing up in the family business and, like his father, he dreamed big. Gus split his time between school and work and developed an exceptional work ethic. In 1968, he enlisted in the U.S. Air Force and served his country for four years. After being honorably discharged in 1972, Gus met his wife, Denise, and they settled in a Chicago suburb where he began working on his dream.

In the Summer of 1973, Denise’s brothers immigrated to the United States from Greece and moved in with her and Gus. Among them was John, a charismatic idealist with a will to succeed matched only by his future partner. Together, Gus and John developed their idea of a quick service restaurant concept that was, at the time, lacking in the Chicagoland market. Now ready with their concept, their life savings and their determination, they sought the most important piece of launching a new restaurant… location, location, location!

Gus’ brother would eventually help them find that final piece by handing Gus a brochure to, what was then billed as “the world’s first indoor amusement park,” Old Chicago, in Bolingbrook, IL.

Mr. Submarine became a reality at Old Chicago in July of 1975 and the tiny sub shop performed well. The mall would eventually fail after only five years but Mr. Submarine never looked back, soon after opening three locations, becoming the first submarine chain in Chicago. Faced with a growing demand for Mr. Submarine sandwiches, it became clear that the best way to allow the business to grow was to transform the family business in to a family operated franchise.

Today the Mr. Submarine franchise is still operated by the founders and their family members.